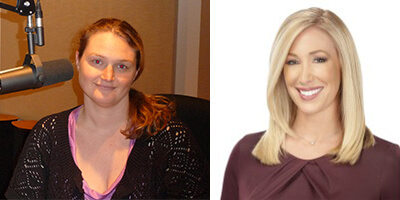 Michigan Radio reporter Sarah Cwiek and WXYZ-TV (Detroit) reporter Heather Catallo have been selected as a winners of a 2020 Wade H. McCree Award for the Advancement of Justice by the Michigan Press Association Foundation.

Cwiek was recognized for her story, “They say their son needs to be in a psychiatric hospital. He went to jail instead” from February 2019, which highlighted impossible situations some families with autistic children find themselves in: stuck in a loop of emergency rooms and police encounters, in a state that makes it all but impossible to get a child admitted to inpatient psychiatric medical care.

Catallo received the honor for her in-depth investigation “Guardianship Epidemic: I just want my parents back,” which showed that as baby boomers age, guardianship abuse is increasingly becoming a bigger problem across the country.

The McCree Awards recognize journalism that examines, explains, exposes and details important issues in law and government. The award is named after distinguished Michigan attorney Wade H. McCree, who served as judge of the U.S. Court of Appeals and Solicitor General of the United States.

Detroit News reporter Karen Bouffard was also announced as a recipient of a 2020 McCree Award for her in-depth investigation “Healing Justice,” which looked into America’s underinvestment in mental health services and the enormous expense of incarceration.

The awards are presented annually to the winners at the Michigan Journalism Hall of Fame ceremony, held each spring. This year’s event has been moved to a later date to be determined.