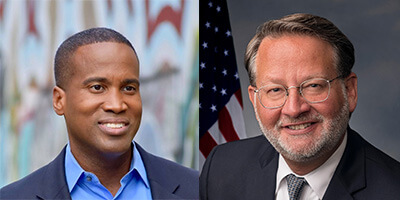 Gongwer reported earlier in the week that James called on incumbent Peters (D-Bloomfield Twp.) to participate in a total of four televised debates leading up to the November General Election, one in Detroit, one in Grand Rapids, one on the Fox News Channel and one on CNN.

James wanted six televised debates in his 2018 challenge to U.S. Sen. Debbie Stabenow (D-Lansing) and she agreed to two, with one occurring on public television and one at the Detroit Economic Club.

Michigan has not seen a debate on commercial television since 1994 and has had a couple election cycles with no debates at all, Gongwer reports. When there have been debates – in 1996, 2000, 2002, 2006, 2008 and 2018 – there have generally been two. One televised on Michigan public television stations and another not televised at the Detroit Economic Club.

There also were no debates in 2012 when U.S. Sen. Debbie Stabenow sought her third term. That year, Republican challenger Peter Hoekstra insisted they debate on commercial television, Stabenow refused and Hoekstra declined the two debates (public television and the Economic Club) to which she had proposed.

Meanwhile, the candidates filed their pre-primary campaign finance reports, reflecting activity from July 1-15. James outraised Peters, $963,069 to $794,079 during that period, the fifth consecutive reporting period in which James has pulled in more funding than Peters. For the same period, Peters spent $1.2 million to $1 million for James. As of July 15, Peters reported $11.6 million cash on hand to $9.2 million for James.