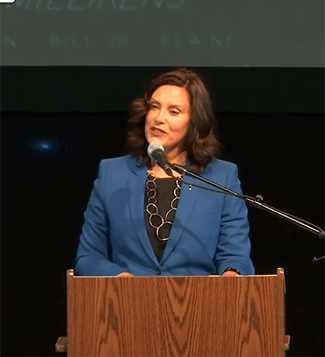 On August 6, Interlochen Public Radio and Detroit Public Television (DPTV) paid tribute to William G. Milliken, who served as Michigan’s governor from 1969-1983, with a celebration of life.  Milliken was remembered, among many other things, for being a symbol of a different era of politics, less divisive and more collaborative, when the ability to compromise was considered a positive attribute for an officeholder.

He died last October in his birthplace, Traverse City. The celebration, held at the Interlochen Center for the Arts was carried on a number of public media websites across the state, including DPTV.org and Interlochen Public Radio.

Bill Milliken was especially known for his prioritizing of the state’s environment, his efforts to help the city of Detroit, and successfully promoting a culture of civility and bipartisan cooperation in state government.

Prior to becoming Michigan’s 44th governor, Milliken served in the state Senate and as the state’s lieutenant governor. He also was president of the former Milliken’s department stores and flew 50 combat missions in Europe during World War II.

A devoted supporter and advocate for the arts, Milliken served on the Interlochen Board of Trustees from 1983 to 1997 and was a vital member of the larger Interlochen community for decades.