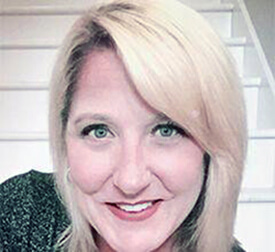 Townsquare Director of Product Development Doug Montgomery says, “We’re excited for Casey to join the team in GR for this newly created local position on WFGR. She’s gonna need snow tires for her Harley though.”

The company’s Grand Rapids Market President Jeff Luckoff adds, “We are elated to have Casey join us in Grand Rapids. Her enthusiasm for West Michigan is contagious and I am really looking forward to having her team up with JoJo, making an already great show even better.”

“I’m super excited to be coming home to Michigan. I’m eager to be with such a forward-thinking and innovative group like Townsquare Media. Many thanks to Todd Lawley, Jeff Luckoff, Doug Montgomery, Brian Thomas and Kurt Johnson.”

Daniels has an impressive resume of success, most recently as OM of Adams Radio Group in Tallahassee, FL. She also had a five-year run on-air at the legendary WZPL/Indianapolis, managed WZOW and WWLV in South, Bend, IN, and was a producer and on-air host at WSBT-TV in South Bend.