Apple has begun rolling out the latest version of its operating system for mobile devices, iOS 14.5. Along with the usual assortment of new features is a long-anticipated change to the way the company deals with the privacy of its users, and this change will reverberate throughout the world of marketing and advertising.

In a nutshell, prior to this release, mobile app developers could track people who used their apps. They could also match their mobile app data up with other data from around the web to target advertisements at consumers. But now, Apple is requiring app developers to ask for permission from people before they it allows them to be tracked. When you open an app on your iOS device, a pop-up window will ask you whether you want to allow the app to track your data “across other companies’ apps and websites.” If you say no, the app cannot ask for permission again.

The move is being heralded by privacy advocate organizations such as the Electronic Frontier Foundation:

“Allowing users to choose what third-party tracking they will or will not tolerate, and forcing apps to request those permissions, gives users more knowledge of what apps are doing, helps protect users from abuse, and allows them to make the best decisions for themselves. This new feature from Apple is one more step in the right direction, reducing developer abuse by giving users knowledge and control over their own personal data.”

But the move isn’t being welcomed by everyone. Digital marketers with business models that rely on targeting ads at consumers will find it much more difficult to reach the right audiences. Chief among these is Facebook, which has argued that Apple’s changes will hurt small businesses that rely on digital advertising on its platform. The social network is trying to frame the issue as one of small business, not privacy, and has even gone so far as to take out a full-page newspaper ads decrying the changes.

Apple exposing all the ways Facebook tracks you with it iOS app is really quite something pic.twitter.com/hDhB85qk1L

It shouldn’t be surprising that at the end of the day, where you stand on the issue ultimately comes down to money. Specifically, how you make your money.

By and large, Apple makes its money by selling stuff: computers, smartphones, tablets, headphones, smart speakers, smart watches, etc. Of the $111.4 billion in revenue Apple that generated in the first quarter of 2021, only 14% came from services; the overwhelming majority came from selling products.

It’s no surprise that when you’re in the business of selling products to consumers, you come down on the side of privacy. After all, “privacy protection” is a feature that you can use to differentiate yourself from your competitors. It’s a cause that Apple has championed numerous times over the years to great effect.

(Side Note: Apple’s business model has had other implications on the radio business, most notably when it’s come to podcasting. For many years, Apple has been a dominant player in the podcasting space, with the Apple Podcasts app being responsible for well over half of all podcast downloads. Yet Apple did relatively little in the podcast space because, well, they’re in the business of selling things. It’s not until Spotify began making great strides in the space over the last few years that Apple started embracing podcast producers. The recent introductions of new revenue-generating features for podcasters by both Apple and Spotify exemplify this.)

Facebook, by contrast, makes the majority of its money by selling access to audiences, not by selling products. Facebook gathers an enormous amount of data on its users and charges advertisers to target people using that data. Efforts to protect the privacy of people’s data is a threat to Faccebook’s business model. According to The Information, internal reports predict that fewer than 20% of Facebook’s users will allow the app to track its data, though this is only expected to impact 5% of its revenue.

So who is right, and what does it mean for radio?

Where Should Radio Stand?

So where should radio broadcasters stand on the issue? On the one hand, the radio industry’s revenue model is similar to Facebook’s — both sell access to audiences. Aside from the occasional t-shirt, radio stations aren’t in the business of selling things. So naturally, radio should take Facebook’s side in this fight, right?

Not necessarily. While radio sells access to audiences, for the most part, it doesn’t use data generated in mobile apps to do so. The radio industry’s chief source of information is Nielsen, which won’t be affected by the changes that Apple is making. Nielsen’s methodology is altogether different, and it already requires people to opt in to have their data gathered. Nielsen’s data set is arguably not as strong as Facebook’s, so radio broadcasters may be thankful that Facebook’s advantage in the competition for local advertising dollars is being curbed.

It’s possible that the radio industry’s stance on this issue will be split. Larger companies with bigger company-wide mobile apps may oppose Apple’s moves, while smaller companies that have individual radio station apps may cheer them on. It may simply come down to how good each company is at gathering digital data, and whether they think they can use that data in a way that will impact the bottom line.

Regardless of where radio broadcasters stand, how do radio listeners view the issue? We’ve been tracking their feelings about privacy in our annual Techsurvey. Here’s what they said in this year’s survey: 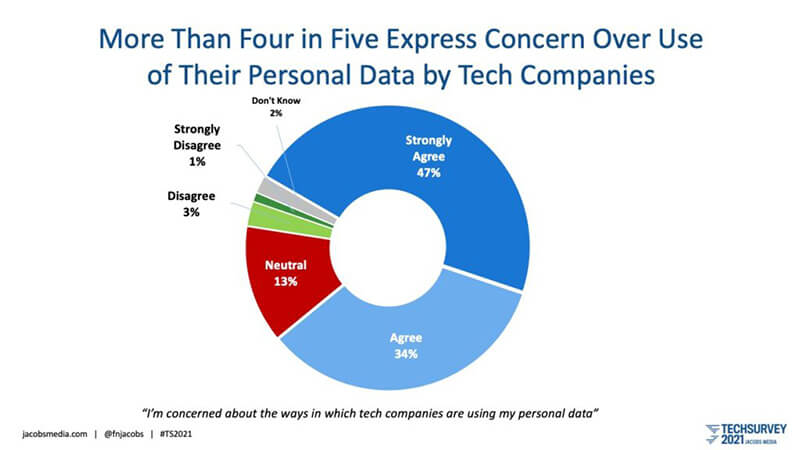 
Posted in Digital/Social/Web, Front Page, May 2021 and tagged Issue 253
Scroll To Top