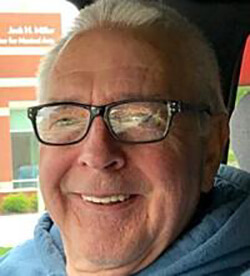 The MAB has learned that veteran broadcaster Ed Ver Schure has died. He was 76.  He was born on March 25, 1945 in Grand Haven.

Ver Schure also hosted a three-hour afternoon talk show on WHTC in Holland, from 2000-2010. Starting in March 2016, he hostedthe station’s Talk of the Town, replacing the legendary Juke VanOss.

In a obituary posted on the WHTC website, Kevin Oswald, Holland’s market manager for Midwest Communications said, “Ed was a valued member of the staff for many years filling a variety of on-air roles, When Juke Van Oss passed in 2016, Ed was the natural choice to take over as host of Talk of the Town until his health prevented him from doing so. Ed was naturally upbeat, easy-going, and had a great rapport with his audience whether on-air or as a host of numerous dances, car shows, and other events over many years.”

He was also a musician and music producer.

Arrangements are by the Dykstra Funeral Home-Downtown Chapel.  Read more on the WHTC website here.