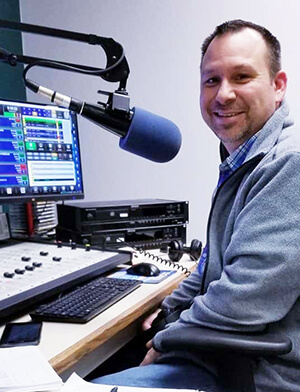 Sanilac Broadcasting of Sandusky (WMIC-AM/WTGV-FM/WBGV-FM) PD/Morning Host Eddie Fury has been notified that he has been recognized by the Community Mental Health Association of Michigan (CMHA) and selected for its 2021 Jim Neubacher Media Award. This honor is awarded annually to an individual(s) or media organization who demonstrates responsible reporting or otherwise shows sensitivity to the issues and concerns of recipients of mental health services and the public mental health system which was created to serve them.

This award was established by the association in 1991 to encourage balanced, sensitive, and responsible reporting on mental health issues and to honor a man whose life was dedicated to advocacy for persons with mental and physical disabilities. Jim Neubacher was a staff columnist for the Detroit Free Press for many years and, although he died on March 22 of 1990, the hope is to preserve his dedication and commitment in some small way through this award.

Fury joined Sanilac Broadcasting in 2019 after spending 13 years at a station in Huron County and is also well known for his web-based site work on Thumb Tailgater Sports. He is a native of Deckerville, attended St. Clair Community College, served his nation as a member of the United States Marines and has worked his way through the ranks in broadcasting. He also spent several years in the Lapeer – Flint area working at a station covering portions of Genesee, Lapeer, Sanilac and Tuscola counties.

His outstanding efforts were brought to the attention of CMHA by the organization’s Central Region. Fury will be acknowledged as an award recipient during the CMHA 2021 Virtual Summer Conference being held June 14 -17, 2021.