Perhaps no other medium still relies on contests as much as the radio industry. When I was a Program Director many years ago, I held a weekly staff meeting that revolved around the question, “What are we giving away on the air this week?” For many radio stations, not much has changed since then. Contests are still a big part of what radio stations do.

The rationale for hosting contests is to drive listenership. Unfortunately, contests are not particularly effective at this. For starters, few listeners tune into radio stations primarily for contests. In Techsurvey 2021, we surveyed listeners about why they listen to their favorite station. Once again, contests ranked at the bottom of the list: 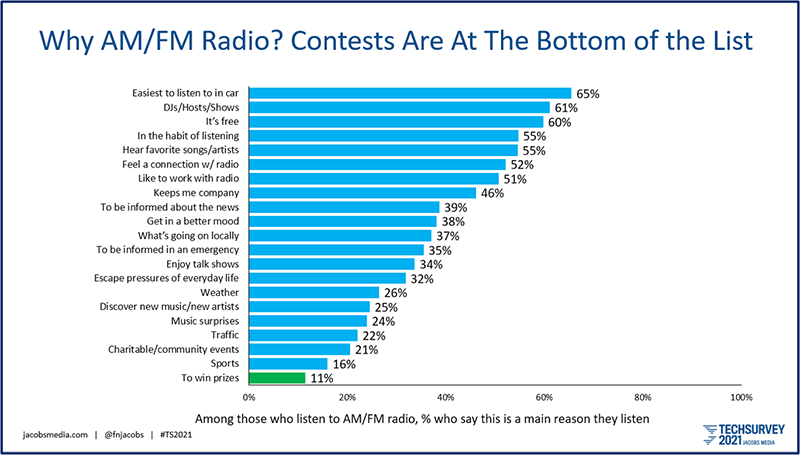 Even if radio listeners were tuning in for contests, Nielsen’s ratings system isn’t refined enough to capture and attribute this listening to those contests. And on the rare occasion when a ratings bump is the result of a station’s contest, the effects are temporary. Stop contesting, and the ratings drop again.

In short, “Ratings” is not a good answer to the question, “Why contests?”

There are, however, some better answers to that question. Rather than abandon contesting, radio ought to rethink the goals of their contests and retool them accordingly. Here are three better ways to use contests:

1. Use contests to capture listener data.
These days, advertisers aren’t just trying to reach the most people; they’re also trying to reach the right people. If I’m the owner of a car dealership located in the South Bay, it does me little good to reach listeners in the North Bay. While radio stations can’t use their airwaves to target consumers that precisely, they can use digital tools to target consumers — if they’ve built a robust database. Contests can help build that database.

Contest entry forms can be used to capture listener data, including names, ages, genders, zip codes and — most importantly — email addresses. To do this, you’ll want to capture this information from everyone who enters the contest, not just the people who win the contest. This may require rethinking your entry method. Asking for “Caller #9” isn’t going to build the email database, but using your station’s mobile app or a text message keyword can.

2. Use contests to generate content.
As a Program Director, I had a rule for every contest we aired: It had to have a Play-Along-At-Home factor. In other words, the contest had to be compelling for people who heard it even if they did not participate. In this sense, I thought of my station’s contests in the same way that I think of Wheel of Fortune: Most people will never play the game themselves, but they’ll still tune in to watch.

For radio, the Play-Along-At-Home Factor used to require that the contests generate interesting phone calls. Trivia questions, embarrassing confessions and riddles were all ways to elicit amusing on-air content from the audience.

Today, the internet adds a new dimension to the Play-Along-At-Home Factor. While contests can be used to generate on-air content, they can also be used to generate online content. For example, in order to win tickets to a local sporting event, a radio station can ask listeners to post seflies in which they’re wearing the team jerseys. These photos can then be shared on the station’s website and social media accounts.

While the Play-Along-At-Home Factor isn’t a new justification for contests, don’t think about it only in terms of generating on-air content. Also look for ways that your contests can generate digital content.

3. Use contests to generate revenue.
Let’s face it, radio stations aren’t airing “Traffic and Weather Together” because the audiences are clamoring for it (see the chart above); they’re airing these reports because they have sponsors who are willing to pay for them. And if that works within your station’s framework, it’s a perfectly legitimate reason.

The same justification can be applied to your station’s contests: You should host contests if you can find a way to generate revenue from them. In the digital era, we can use the two goals above — data capture and content creation — as incentives to lure sponsors. For example, share the email addresses of entrants with the contest sponsor* or require entrants to wear gear from the sponsor in the contest photo entries. You can use these new methods to provide more value to your station’s clients.

(*Check with your legal team to ensure that you’re securing the necessary permission before doing this.)

Radio contests aren’t what they used to be, but that doesn’t mean they need to fall by the wayside. Instead, it’s time for radio stations to rethink the reasons they’re holding contests and to redesign them with one or more of these goals in mind.


Posted in Digital/Social/Web, July 2021 and tagged Issue 263
Scroll To Top