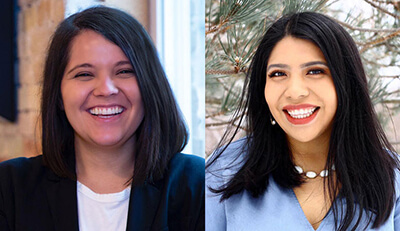 “It’s been really exciting to hear the positive feedback from community and how thankful they are to finally have accessible weekly news updates in Spanish,” said Jokisch Polo.

Each week Jokisch Polo and Crescencio focus on the major headlines in Michigan and speak with organizers, leaders and those most impacted by the news.

“‘¿Que Onda Michigan?’ is the culmination of WKAR’s efforts years in the making,” said Karel Vega, WKAR News editor. “I could not be more proud of the work that Michelle and Araceli are doing for Spanish speakers in mid-Michigan and across the entire state.”

In a recent interview with WKAR reporter Kevin Lavery, Jokisch Polo says engaging the community by soliciting their story ideas will ultimately be the key to the show’s success.

“That’s the only way that we’re going to truly be a community effort,” Jokisch Polo said. “So, in the future, I think we really want to build that network of community, you know… this is important to me.”

Episodes of ¿Qué Onda Michigan? are available for free on the NPR One App, Spotify, npr.org, at wkar.org/qu-onda-michigan and coming soon to other podcast services. New episodes are published each Friday at 3 p.m. ET.