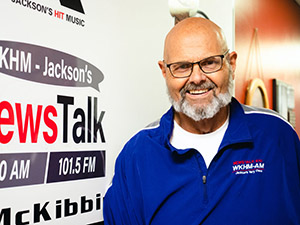 McKibbin Media Group (Jackson) has announced that it’s very own Greg O’Connor is the recipient of Jackson College’s 2021 Distinguished Service Award.  The Jackson College Board of Trustees presents this award each year to an individual or individuals who demonstrate exemplary service both to the community and to the College.

Honorees are selected for their care and concern, beyond self, for the welfare and educational advancement of the community that has been expressed, in part, through the College. It is the highest honor given by the College to committed and involved community leaders, one similar to that of an honorary doctorate bestowed by universities.

He graduated from Jackson Community College in 1974, attended Eastern Michigan University and Michigan State University when he accepted a job at WCBY Radio in Cheboygan, Michigan. He served there as an on-air personality and sports broadcaster for five years.

O’Connor moved back to Jackson in 1983 to join WKHM Radio as sports director and mid-day host. He soon became the morning drive host and has covered local news and high school football and basketball games for many years. Additionally, for two years he covered basketball and football games for Central Michigan University.

He has won a multitude of awards from the Michigan Association of Broadcasters and AP and UPI wire services for excellence in news and sports reporting and play-by-play. He was honored along with his father in 2010 with the Jackson Citizen Patriot’s Al Cotton award.

He has had the distinction of interviewing individuals from all walks of life, including Jackson College presidents Harold Scheffer to Dr. Dan Phelan.

O’Connor has been married to Therese for 37 years. They have two sons, Tony (wife Simone) and Steven, and two granddaughters, Mila and Margo.