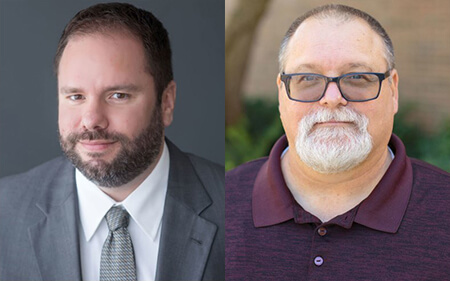 “Technology is essential for making content as well as distributing it,” said Henderson. “I look forward to ensuring WKAR’s hosts, journalists and producers have the tech they need to produce great material, as well as making sure their finished products are available to the public across a wide range of platforms.”

Henderson came to WKAR in 2013 after working for Midwest Communications, where he was the Network Administrator for Midwest’s 13 Michigan radio stations.

Joining WKAR as director of broadcast technology, Dave Mann is responsible for keeping WKAR television on the air and available through cable and streaming services. He comes to WKAR from ION TV in Chicago. Since Mann’s arrival at WKAR, he has played an instrumental role in the station’s work with NextGen TV.

“One of the most exciting aspects of coming to WKAR is the opportunity to work, learn and grow at an organization that is not simply ‘involved’ in NextGen TV, but actually on the leading edge of this tremendous effort to reshape our Industry,” said Mann.

Mann steps into the broadcast technology position following the retirement of Gary Blievernicht, who retired at the end of August after 30 years of outstanding service at WKAR.

“I welcome the challenge of maintaining WKAR’s reputation for innovation in the same spirit as Gary did during his years of service at WKAR,” said Mann.

Henderson and Mann look forward to keeping WKAR’s award-winning educational content, journalism and entertainment available over the air, on cable and on digital services.