For more than six years, I have taught radio stations how to implement a digital strategy known as Content Marketing. The concept is simple: create content — blogposts, videos, podcasts, etc. — to attract an audience. The strategy is not a new one. In fact, it pre-dates the internet. One of my favorite examples is the Michelin Guide, which Édouard and André Michelin first introduced in 1904 back when there were fewer than 3,000 cars on the road in their home country of France. Their hope was to increase the demand for cars and, by extension, Michelin tires.

Not only is Content Marketing not a new strategy, it’s not even new to broadcasters. The basic premise of a station is to put content on the air to attract an audience. My role is simply to help them do this online as well.

A few decades ago, creating and publishing content was a difficult task that required specialized equipment and skills. To reach a massive audience, you needed a printing press, a radio tower, or a television studio, along with the appropriate staff to operate them. Only a handful of organizations had the resources and the expertise.

However, that changed with the explosion of the internet. One of the most important technological trends of the last 30 years has been the increased access to digital publishing tools. Today, anybody can easily and inexpensively create and distribute content around the world using their smartphone and online platforms like YouTube, WordPress or Anchor.

This easy access to content creation tools has had both positive and negative effects. On the one hand, it has empowered a diverse range of voices that did not previously have access to publishing platforms. On the other hand, it has also ushered in a glut of content of dubious quality. At best, consuming this content is simply a waste of time; at worst, it harms the audience members and those around them.

If the last 30 years is the story of increased access to digital publishing tools, the COVID-19 pandemic has started a new story: the mass adoption of a new class of digital tools. These new tools — including Zoom, Slack, Discord and Facebook Groups — enable people to interact with one another, often in real time. Unlike publishing tools, these platforms were not designed for the one-way, one-to-many dissemination of content; they were created for back-and-forth communication.

In short, they’re designed to build a community, not attract an audience. Community members interact with each other; audience members don’t.

We are all familiar with “audiences.” They are groups of people who consume content or a channel distributing content. (I am using the word “channel” to describe any media outlet that distributes multiple different pieces of content; Netflix, HBO, Z100 and the New York Times are all channels.) But what is a “community?” 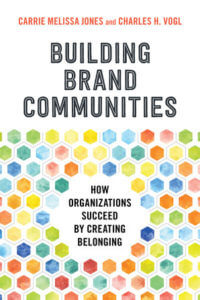 In their 2020 book Building Brand Communities: How Organizations Succeed By Creating Belonging, Carrie Melissa Jones and Chales H. Vogl define a community as “a group of people who share mutual concern for one another. Communities convene around at least one shared value, usually more.”

The authors contrast this with what they call “mirage communities”:

“When building any community, mutual concern among members remains both fundamental and critical. Without it, there is no authentic community to support an organization. This is why mutual concern is often missing in what we call ‘mirage communities.’

“For example, if you have a newsletter reading list, subscribers may respond back and forth to your emails. That’s great. But if those subscribers don’t yet care about one another’s welfare, there isn’t community (yet).”

“What you have is a list of readers or followers, and there’s nothing wrong with this. Community building takes different and far more investment toward creating something richer and more powerful, and offering different possibilities.”

The authors never explicitly use the word “audience,” but they do contrast “communities” with “groups” and “mirage communities.” While some content has given rise to communities — such as Harry Potter’s Potterheads, Firefly‘s Browncoats or Star Trek‘s Trekkers — most audiences are not communities. Content can have a huge audience — think Two and a Half Men — and not give rise to a community; in fact, an audience’s large size may be a barrier to creating community.

Vogl identifies seven principles for bringing a community together:

Content plays a role in communities — it’s crucial for its Stories (#5) — but content alone is not sufficient for creating community.

The interactive digital tools that have emerged recently enable people to create Temples (#4) a space for communities to gather. Coupled with the right strategies, these tools can be used to implement all seven principles.

Communities are usually smaller than audiences. This is, in part, because people can make up the audience of a particular piece of content and the channel that distributes that content at the same time. For example, if I watch Ted Lasso, I am part of both the Ted Lasso audience and the Apple TV+ audience. That doesn’t mean that I am equally predisposed to joining a community for either. My affinity for Ted Lasso is far greater than my affinity for Apple TV+.

This is a lesson that many radio stations learned when Howard Stern departed terrestrial radio for satellite radio. The audience was attracted by the specific piece of content, and without it they had little loyalty for the channel carrying the content.

That’s why, as publishing tools became less expensive, the trend in the media industry has been to focus channels on particular niches. We see this most clearly in cable television, with channels devoted to science fiction, home improvement and food. In audio, we see a similar phenomenon occurring with podcast networks that focus on a specific interests. In essence, these channels have become narrower but deeper.

A channel with a narrower, more focused audience is still not a community, but it is in a better position to build a community because there is a greater chance that its audience shares one or more values, and are therefore predisposed to share mutual concern for each other.

When publishing tools were expensive, brands focused on the size of an audience when deciding which channels to use to attract customers — more was better. As publishing tools became more accessible and the general population was carved into niche audiences, many brands have focused on reaching the “right” people, not just the most people. At first, brands used demographic characteristics, such as age, gender and location to target potential customers. The rise of digital platforms like Google and Facebook soon enabled them to use psychographics, such as their activities, interests, and opinions to focus their efforts.

That’s where communities come in.

Recently, a number of my client projects have involved developing digital strategies not for the station or broadcasting company as a whole, but for a particular piece on content on the channel, such as a single show or specialty feature. These shows or features usually revolve around a niche interest: personal finance, children and classical music, local musicians, etc. This makes them fertile ground for building communities using the new set of digital tools that has emerged.

Broadcasters tend to develop their digital strategies at the channel level — designing something that promotes the station as a whole. Given the new set of interactive digital tools that has become mainstream, they now have new opportunities. These opportunities will revolve around specific shows or features. So it’s time to take a fresh look at your station’s shows and features and ask, “Can we build a community around one of these?”