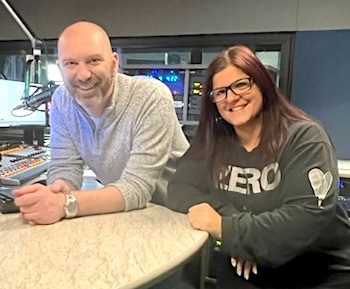 Vitale is a native of Southeast Detroit and has spent 23 of her 24 years in radio on Detroit airwaves. She was part time on WDRQ-FM when it was formatted as a CHR outlet, was heard on Cumulus’ WDVD-FM and joined the morning show on WNIC-FM in 2009. For 15 years, she worked in various roles at the Specs Howard School of Media Arts, including serving as the Director of Admissions. In 2015, Vitale returned to Country WDRQ-FM as local morning anchor of the syndicated NASH FM Morning Show. She was also heard on WDZH-FM, before returning to fill-in on 96.3 WDVD on the Blaine Fowler Morning Show. She’s hosted mornings at New Country 93.1 since November 2021.

Cumulus Detroit VP/Market Manager Steve Finateri said, “New Country 93.1 FM is gaining momentum in Detroit, and having Goose at the helm with Renee in Morning Drive will be the adrenaline Detroit’s country fans have been looking for. Goose is a radio veteran with a proven track record of attracting large audiences. Now he has a chance to make a real impact in his hometown, returning to the very place he was born and raised, and dreamt of hosting a morning show here his entire career.”

Cumulus Detroit Director FM Programming David Corey commented, “I couldn’t be more excited to introduce our Detroit listeners to Goose & Renee, and vice versa. They are in for a treat each and every weekday. From the moment I met Goose and Renee separately, I knew they would be the right team to help lead New Country 93-1 to even greater heights. Get ready, Detroit.”

Seller remarked, “There are no words to describe the excitement I have about coming back to my hometown of Detroit, where I started my radio career. This is absolutely a dream come true. I missed Detroit so much while living in Colorado, I actually opened up a coney and slider restaurant to emulate my two favorite places, Lafayette Coney Island and Greene’s Hamburgers. I can’t wait to discover all the amazing things that have happened in and around Detroit while I’ve been away.”