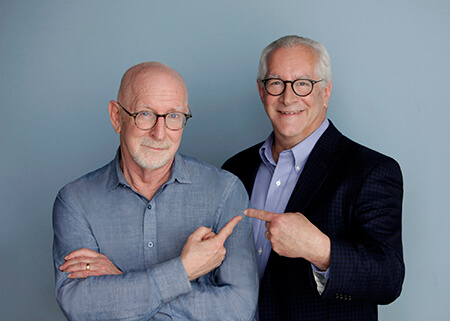 The National Association of Broadcasters has announced that Detroit-based radio consultants and researchers Fred and Paul Jacobs from Jacobs Media will receive the prestigious National Radio Award at the NAB Convention in New York City in October.

Paul and Fred recently helped the MAB finalize a new strategic plan and presented it to members during the Summer Advocacy Conference earlier this month at Crystal Mountain in Thompsonville.

The National Radio Award is the highest honor in the radio industry and has been awarded annually since 1984. Past recipients include Howard Cosell, Larry King and numerous luminaries from the radio broadcasting industry.

“Radio broadcasters rely on Fred and Paul Jacobs for their industry-leading research and market insights to help them innovate, better serve listeners and reach new audiences,” said NAB President and CEO Curtis LeGeyt. “We are delighted to present this honor to the Jacobs brothers for their decades-long leadership and commitment to radio.”

Fred Jacobs, the creator of the Classic Rock format for radio, founded Jacobs Media in 1983. Prior to that, Fred was the Program Director for WRIF and the Director of Radio Research for the ABC Owned and Operated FM Radio stations. Since its founding, Jacobs Media has been a leading visionary for the industry, including helping define radio’s role in the automobile and its digital transformation.

Paul Jacobs joined Jacobs Media in 1991. He began his career in sales in Detroit radio at WNIC and then at WRIF, before moving to Dallas in a management role. He returned to Detroit in 1988 as the founding General Manager of WDFX (“The Fox”). At Jacobs Media, he partnered with his brothers Fred and Bill in the role of General Manager to help grow the company into the force it has become.

“This is truly an honor that frankly, caught us by surprise,” notes Fred Jacobs. "This is an award that goes to the CEOs and major movers and shakers of the radio industry. Not only are we the first brothers to receive this award (something I am very proud of), but also the first consultants as well.”

The Jacobs brothers will receive the award on Wednesday, October 19th at the NAB Show, which will be held at the Javits Center in New York City. A list of past award winners can be found at: https://www.nab.org/events/awards/pastAwardWinners.asp?id=1929