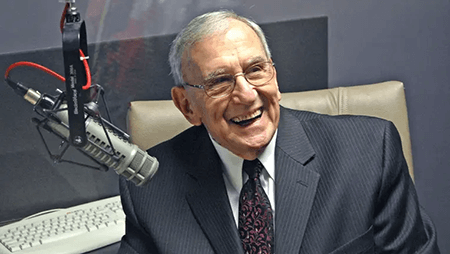 Specs Howard, the founder of Specs Howard School of Media Arts in Southfield passed away September 3 at age 96.

"I am heartbroken to let you know that in the early hours this morning, Saturday, September 3, 2022, my father Specs Howard completed his journey here on Earth," said Alisa Zee, Specs Howard's daughter.  "He was always grateful to the entire media community. He felt your embrace every step of his professional journey, knowing that his mission to help change lives for the better was supported and guided by all."

Howard was born Julian Liebman in 1926 in Kittanning, PA.  He got his start in radio in Pennsylvania in the 1950s, moved to Cleveland and took the name Specs Howard and worked for several years as a Top 40 DJ, according to an official biography.  In 1970 founded what was originally named the Specs Howard School of Broadcast Arts in Southfield. Graduates of the school, which was later named the Specs Howard School of Media Arts, can be found in radio and television stations across the Midwest.

In 2005, Howard was inducted into the Michigan Broadcasting Hall of Fame.

Alisa Zee added. To everyone who ever listened to him on the air, graduated from the Specs Howard School, hired the people he trained or even just said nice things to or about Dad, the entire Specs Howard Family says, "Thank You."