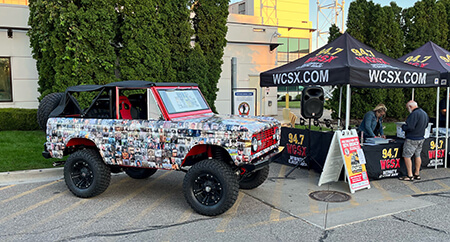 Building on the fable of “Stone Soup” where everyone pitches in, Big Jim’s House called up listeners and local businesses to build a 1974 Ford Bronco ENTIRELY from donations (including the actual car). The project began in November of 2021 through the finale on Thursday, September 8th, 2022, where one lucky raffle ticket owner won the vehicle.

The Bronco was wrapped in pictures of veterans to honor their service. Total raffle ticket sales for the Stone Soup Bronco raised $150,000 to benefit Veterans Returning Home. In addition, Kroger donated $10,000 to the project. 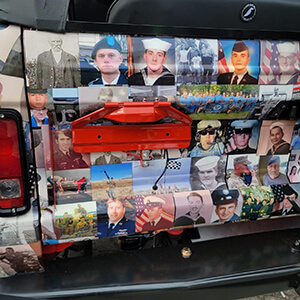 Many people and organizations collaborated on the project. In addition, celebrity Jay Leno took time out of his schedule to check out the Bronco on Woodward Avenue earlier this year while at an appearance during the annual Woodward Dream Cruise.

“Building cars in Detroit and helping veterans is such a Motor City thing” said Morning Show Host and Navy Submarine Veteran Jim O’Brien. “WCSX would like to thank all the people and organizations that helped to make this project a huge success and raise money for Vets Returning Home.