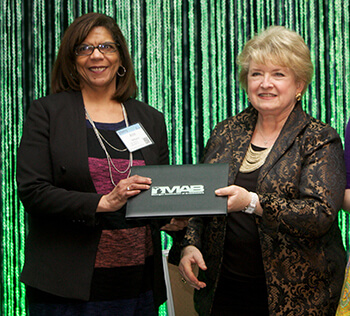 September 23, was the last day of work for Ann Williams, News Director at Alpha Media's WSGW-AM/FM (Saginaw).  Williams has retired after 40 years in the industry. She began at WSGW in 1983 as a reporter. After five years at WEYI-TV, she returned to the WSGW in 2005.

“Hearing from so many coworkers and listeners... it’s really nice knowing people appreciated what I did,” Williams told Saginaw News. “It’s humbling because even if a story gets praise internally, you don’t always get to hear the heartwarming responses from people who are affected the most.”

Williams has been the recipient of multiple awards over the years from both the MAB as well as the Associated Press.

Posting on its Facebook page, the station wrote, "Ann is a longtime WSGW voice heard anchoring, reporting, producing investigative series work, plus a stint as co-host of "Listen to the Mrs," Ann was involved in many administrative duties.  Ann is very respected by her friends and colleagues within WSGW, as well as all media members in the Great Lakes Bay Region and beyond.

Ann's reputation for fairness and professionalism was always appreciated and will be remembered as part of her legacy. We will miss her kindness, her laughter, her caring nature and so much more. We Love You, Ann!"