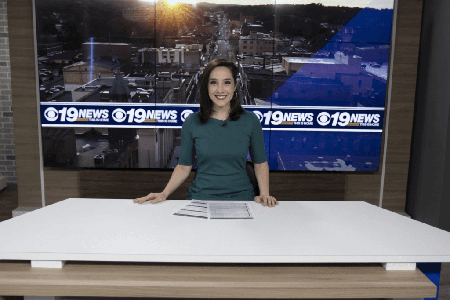 Lilly Broadcasting's WZMQ-TV (Marquette) has announced that it has begun airing live newscasts from new studios in downtown Marquette.  The station operates with a new set, studios and newsroom at 142 W. Washington in Marquette. The second floor was gutted and completely remodeled to become the station’s new home. Some construction continues in the back half of the building to complete the project.

The station also announced its new anchor lineup.  Sarah Blakely has returned to the Upper Peninsula to anchor the station's 6:00 and 11:00 p.m. newscasts.  She is a former morning and evening news anchor and was previously a reporter at the NBC station. Blakely has also anchored news in South Dakota. A native of Indiana, she graduated from Purdue University. Blakely will also oversee the station’s news department as Executive Producer.

Blakely will be joined by weather forecaster Ariane Stassek. Stassek graduated from Central Michigan University and began her broadcasting career in Marquette. She is a certified teacher with extensive educational experience. Before returning to the U.P., she spent time working for CBS Radio in Portland, Oregon.

Karl Bohnak joins WZMQ-TV after more than three decades as Chief Meteorologist at Marquette’s NBC affiliate. The Mining-Journal called Karl “the Upper Peninsula’s weatherman” after a 33-year forecasting career on local television. Bohnak will produce a weekly segment, “That’s What Karl Says” each Wednesday night at 6:00 p.m. The feature will focus on fascinating weather history and major weather events in the U.P.  Bohnak is uniquely positioned to bring the stories of big storms and weather phenomena to life as the author of four books about U.P. weather history.

Megan O’Connor is another former local anchor appearing weekly on 19 News. She will host “What’s UP with Megan O’Conner” Tuesdays at 6:00 p.m. with a unique perspective on local events and celebrations.

Longtime radio host Jim Koski will produce a weekly commentary titled “Life in the 906” Mondays at 6:00 p.m. on WZMQ-TV. Koski is well recognized for his work in radio, community events and with WNMU-TV at Northern Michigan University.

“It’s important that journalists understand and appreciate the communities they serve,” said COO John Christianson. “We are very fortunate that every person on the WZMQ 19 team was already living in the U.P. when they joined the team. Having people like Sarah, Megan, Karl and Jim to provide additional context and background is a huge advantage.”

Also joining the 19 News team is Luke Ghiardi, sports director for MediaBrew Communications. Ghiardi will produce a weekly segment titled “Cover 2” each Thursday that tells the story of local athletes and teams achieving success. Each Friday, WZMQ’s Scott Minshall will have a unique look at teams and players and their relationships with the U.P. with a segment titled YOU-P Sports.

WZMQ-TV was awarded the CBS affiliation in late January of this year. While the new station was built and local staff hired, the station provided local news from Pennsylvania studios on a temporary basis. “We are so excited to finally be ready to move into the new facility and become even more fully engaged. This is a big step but not the last one,” according to Christianson.