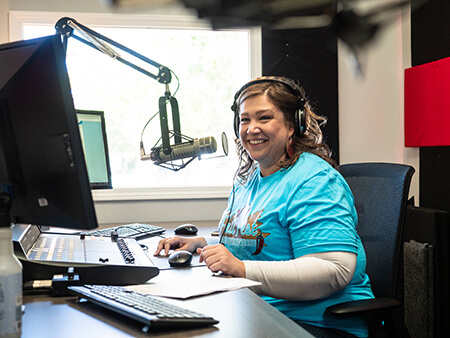 McKibbin Media Group (MMG) has announced the grand opening and ribbon cutting for its new downtown broadcast studio. The ribbon cutting event will take place on Tuesday, October 18 from 4 p.m. to 6 p.m. at 134 W. Michigan Avenue. The event is being held in partnership with the Greater Jackson Chamber of Commerce.

Visitors of the grand opening can enjoy cider and donuts, enter to win prizes, such as tickets to see Paul Reiser at the Potter Center on October 23, tour the studio and take photos. The event will also be a meet and greet with local MMG on-air talent: Scott Clow & Jenny Lewis from the K105.3 Morning Show, Greg O’Connor of WKHM fame, “Captain” Steve Boyle of 95.9 The Power Cow and WKHM, Jared “J-Rod” Hammond of K105.3 and Marc Daly of Fox Sports 101.9 FM.

The downtown branch of McKibbin Media Group’s Jackson stations is located inside the offices of the Jackson Chamber of Commerce and is sponsored by Tripp’s Collision, Art Moehn Chevrolet, Lead Bunker and County National Bank. The four studio partners are also the sponsors of the primary studios at 1700 Glenshire Drive.

“This is a proud moment for McKibbin Media Group,” MMG President and Owner Katina McKibbin said. “To have a downtown Jackson presence for our radio station group is very important to the growth and success of our business. Downtown Jackson has been going through a wonderful revitalization period and we’re excited to be partnering with the Jackson Chamber of Commerce to have a fully functioning broadcast studio for all our stations that will be a great show piece for our business down there.”

“My husband and co-owner, Jamie, who passed away in 2020, always had a vision of MMG being in downtown so I’m happy we were able to carry on this vision for him as well. He would have been excited for this new venture,” Katina McKibbin continued.

McKibbin Media Group will retain its longtime Jackson studio headquarters and offices in Summit township, but the downtown studio provides the added capability of doing live broadcasts on any of the four Jackson-based stations: K105.3, NewsTalk 970AM/101.5FM, 95.9 The Power Cow or Fox Sports 101.9 FM. This studio will be utilized on a regular basis for live broadcasts on the stations.

The first major broadcast at the new location will take place Friday, November 11, 2022 for the annual K105.3 13-hour Charity Radiothon. Stay tuned for further details on this event.