Earlier this year, I wrote a blogpost describing how I built a television studio in the offices of Jacobs Media. Apparently, I’m not alone. In our annual AQ survey of radio on-air talent, we asked how many broadcasters had built a home studio. Here’s what they said: 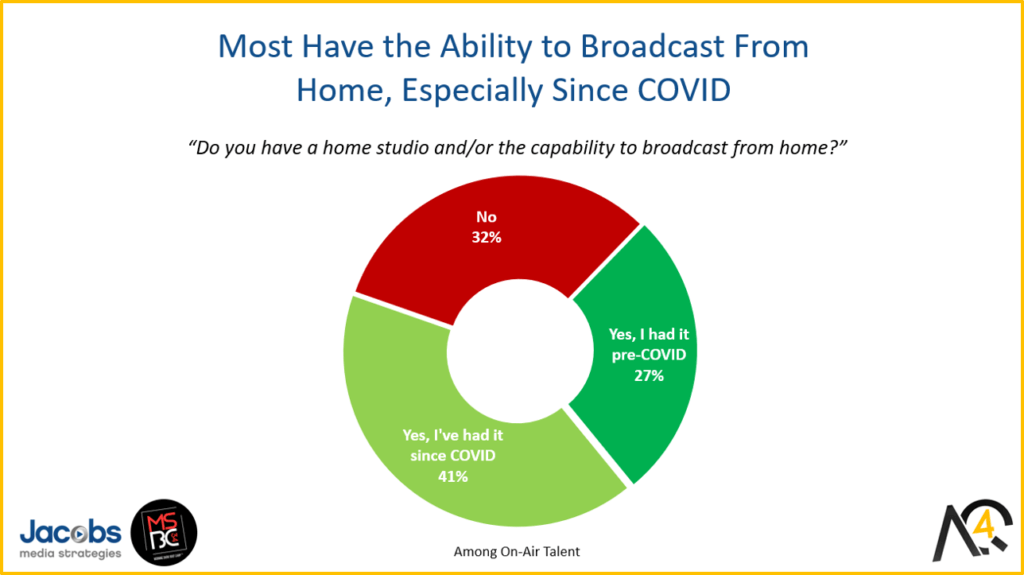 After seeing my article, Don Anthony (a.k.a. The Mouth) invited me to host a panel discussion at Morning Show Boot Camp about how to build a home studio. I selected an assortment of audio professionals for the panel, including Patrick Berger, the Director of Engineering for the Cumulus cluster in Chicago; Andrea Klunder, the founder of The Creative Imposter podcast production studio; and Edward Ruiz, founder for the film production company Mondo Machine Productions. They brought a wide range of audio and video production knowledge to the panel, but I knew that I still needed an on-air personality. 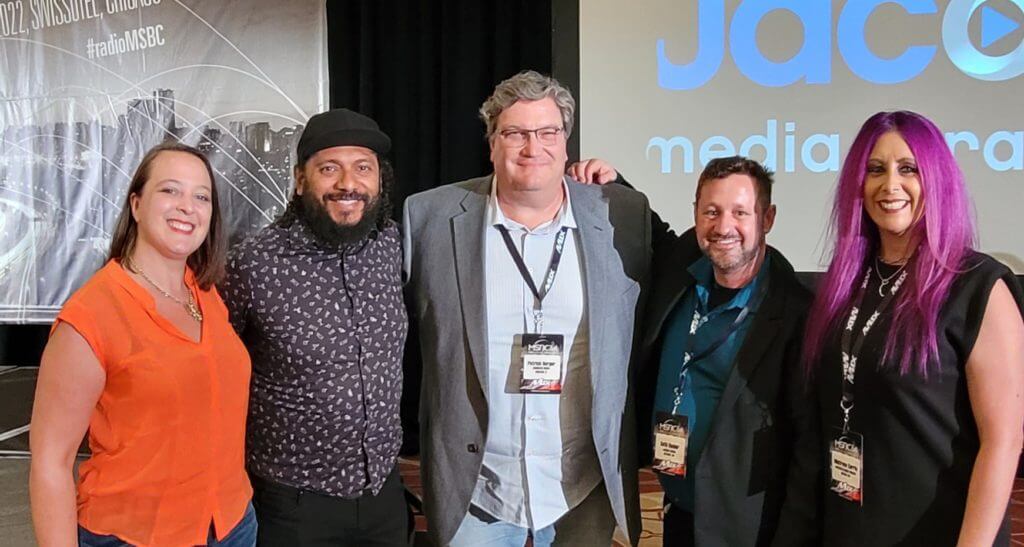 Bob Kernen, the COO of jācapps, our sister company that builds mobile apps for radio stations, suggested that I talk to Mistress Carrie, the longtime radio personality at WAAF. I had never met Carrie, but I’ve known of her since my days working at WBCN back at the turn of the century. WBCN and WAAF were on opposite sides of one of the all-time epic radio wars. 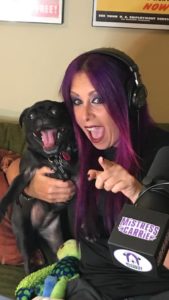 Despite serving in the opposing trenches, I have always admired the way Mistress Carrie built both her station’s brand and her personal brand. Her style always resonated with Bostonians, and she has spent nearly 30 years building connections both with bands and within her community. I called her up, and she told to me the story below. It’s a story about how she nearly lost everything she had invested into her career when WAAF was sold to EMF, how she contemplated starting over in a new city, and how she was ultimately able to find a new way forward while staying in Boston.

These days, even radio personalities who have spent decades building a personal brand as strong as Carrie’s are at risk of losing their job in a move that has far more to do with Wall Street than their on-air performance. I asked Carrie to share her story in this blog to reassure colleagues that even if the worst comes to past, there are still opportunities and options for quality broadcasters. I hope you’ll find inspiration in her tale… -Seth Resler

Well, that was my hope anyway. What do you do when you’ve been working at the same place for 29 years, and then POOF!… it’s gone? How do you find a new job, when you don’t even have a place to put together a demo and apply for one?

That exact nightmare was what I went through in February of 2020 when my beloved WAAF had its signal sold, and after 50 years was off the air. I had worked my way up from unpaid intern to the APD and midday host, with stints on the promotions street team, the nighttime on-air shift, and PM drive. I had never wondered where I could record or produce anything for my show. I always had ready access to the best gear, staff that could help me with whatever I needed, and engineers in case something went wrong.

At midnight on February 21st, 2020 WAAF was gone and I thought… “What am I going to do?!” After some great interviews, I foolishly thought I’d end up at another station, working for a new company, no problem.

Covid-19 had other ideas.

It soon became obvious to everyone that things were changing rapidly, and the future was uncertain. Luckily my employment agreement bought me some precious time, but not enough to help me sleep at night.

As more and more companies instituted hiring freezes and sent employees home to work from their dining room tables — if they were lucky enough to keep their jobs at all — I started to realize my future was not looking as good as I thought. I started asking myself ‘what else can you do?’ because what I had always done might not be a possibility anymore.

One night, I stayed up all night making a list of my ‘marketable skills’ and I realized that this is what I do… I just didn’t have a place to do it. If no one was going to offer me a place, why don’t I just build my own, and see what I could make happen myself? I made the decision but had no idea how to even begin. 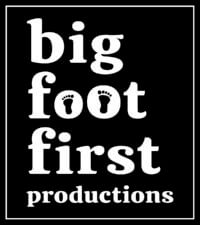 I figured I needed a company, my own LLC so I could manage my brand and write everything off as a business expense. Big Foot First Productions was born. (I have two different sized feet. It’s been an inside joke for years and is reflected in my company logo)

Now… where is this studio going? It needed to be roomy enough to organize whatever career I was going to build, separate from my hectic household, and it must be quiet!

I opted for the small bedroom in my basement, that housed the treadmill that had helped me run the Boston Marathon the year before, in my ‘former life’. (That accomplishment seemed easy compared to this.) It had windows on only one wall, was carpeted, had a closet, and plenty of plugs. 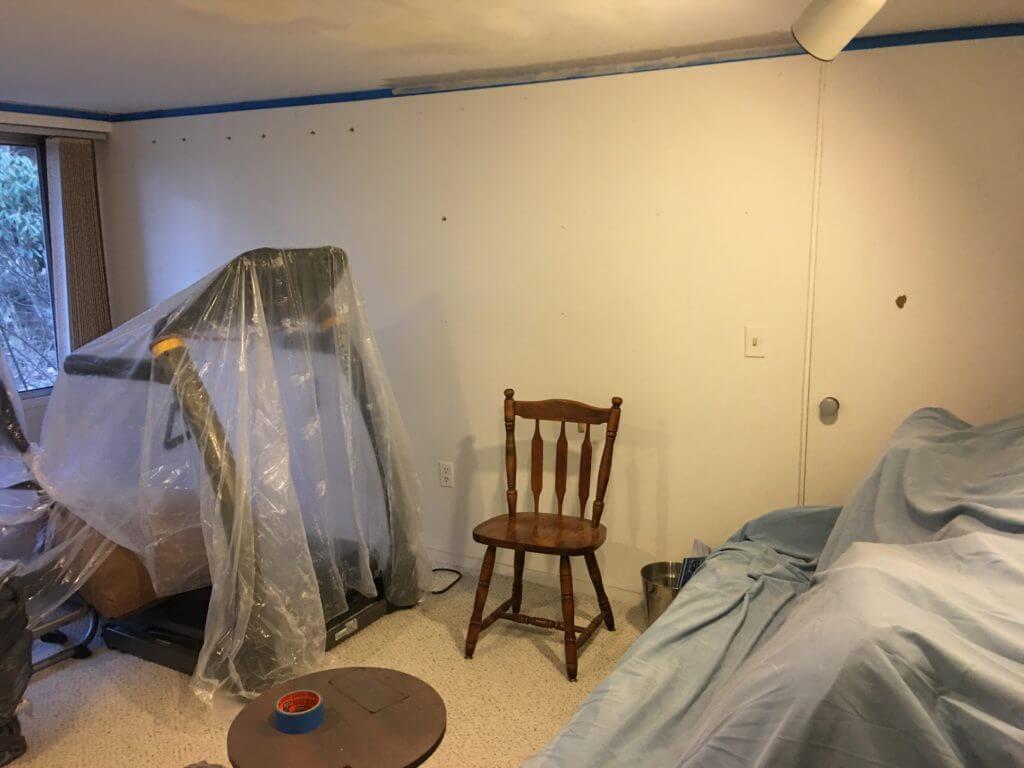 That’s when I realized I had no idea how to build a studio! Since I don’t do anything half-assed, I called a couple of friends: a musician and a professional sound guy. Jim at RPM Dynamics started the design and ordering list, microphones, cables, power converters, speakers, a mixer, headphones, and jacks to plug everything into. Sean, my musician friend gave me advice about editing software, and computers. Luckily, Image Custom Cases is located here in Massachusetts and the guys in the shop listened to me on the air for years and offered to build the desk that would become the center of my new studio. It was going to look like stacked road cases backstage at a concert. Perfect! I opted for a custom cut laminate countertop from Home Depot so it would be durable, fit perfect, and most importantly, I could get it during a pandemic.

After calling in another favor at Latini Creative Solutions to have graphics made for my new company and logos made for myself, I consulted with an old WAAF friend to help with the networking. Luckily, our Imaging guy Andrew Kaiser had a degree in Computer Science, and he helped me with my backup system (18TB) and the UPS (uninterrupted power supply) so if the power went out, I wouldn’t lose all my work. He also helped produce the badass intro to what would become The Mistress Carrie Podcast. 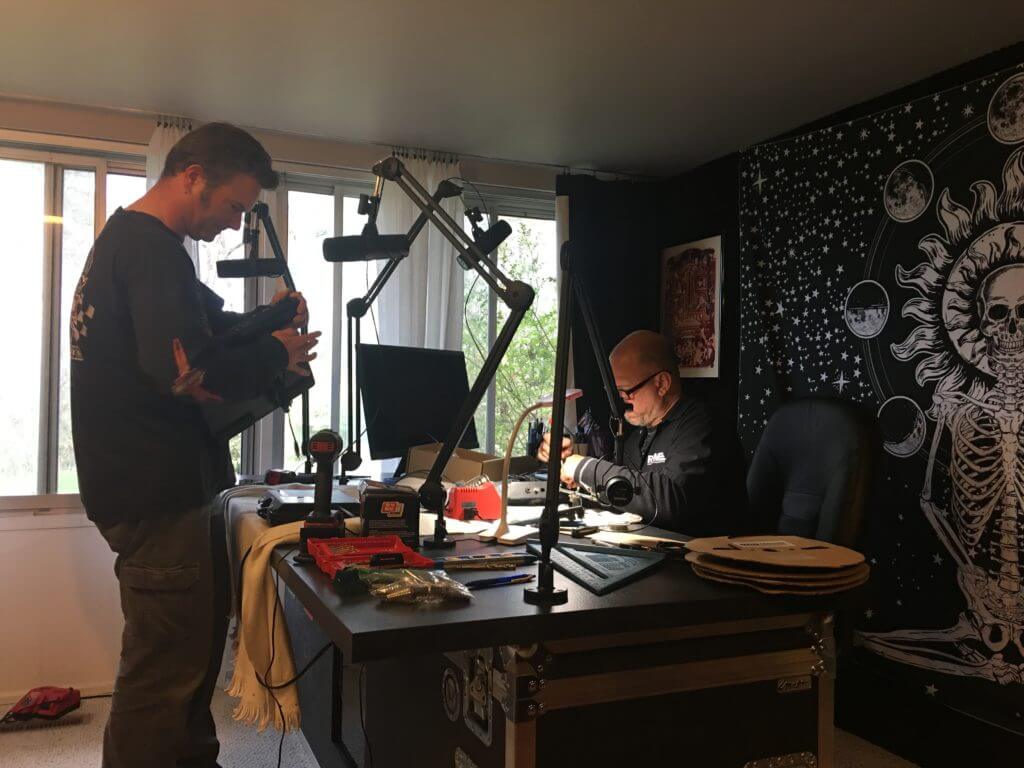 My husband bought the soundproofing tiles, and I installed them with a little help from YouTube. I had custom Hunter Douglas window treatments installed to cut out the noise from outside, because I still wanted the ability to open the windows, and for the first time in my career have fresh air while I edited audio. I had the closet custom designed with drawers for my archives, and hooks and pegs for all the cables, and enough storage to keep all the boxes and manuals organized. 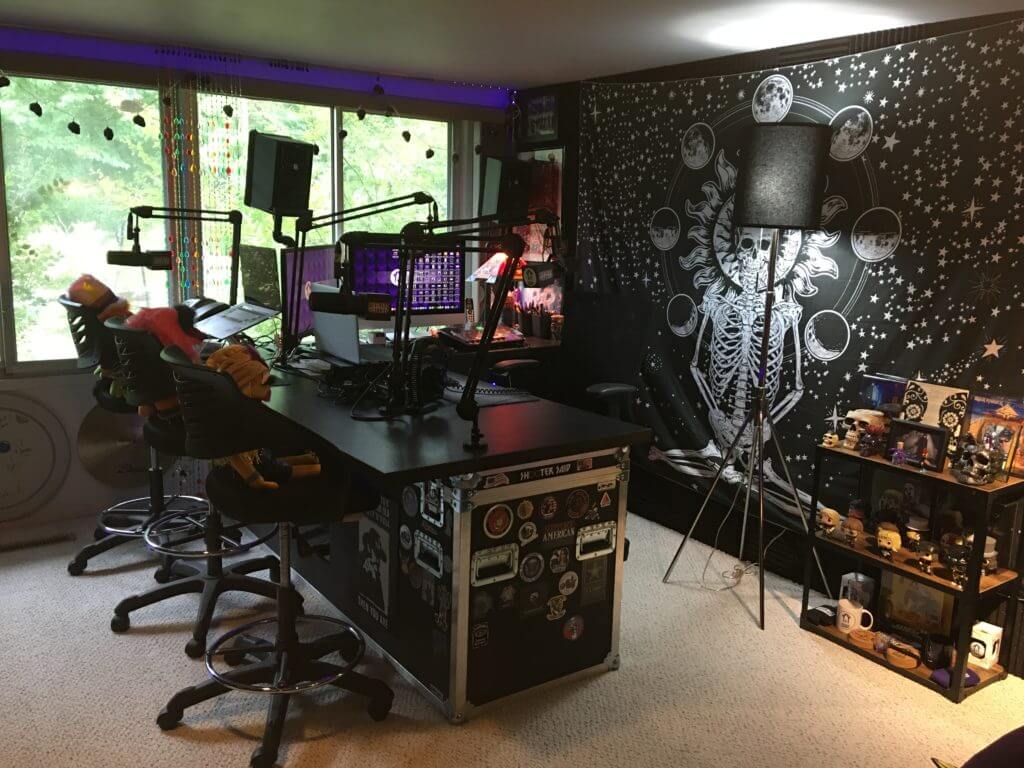 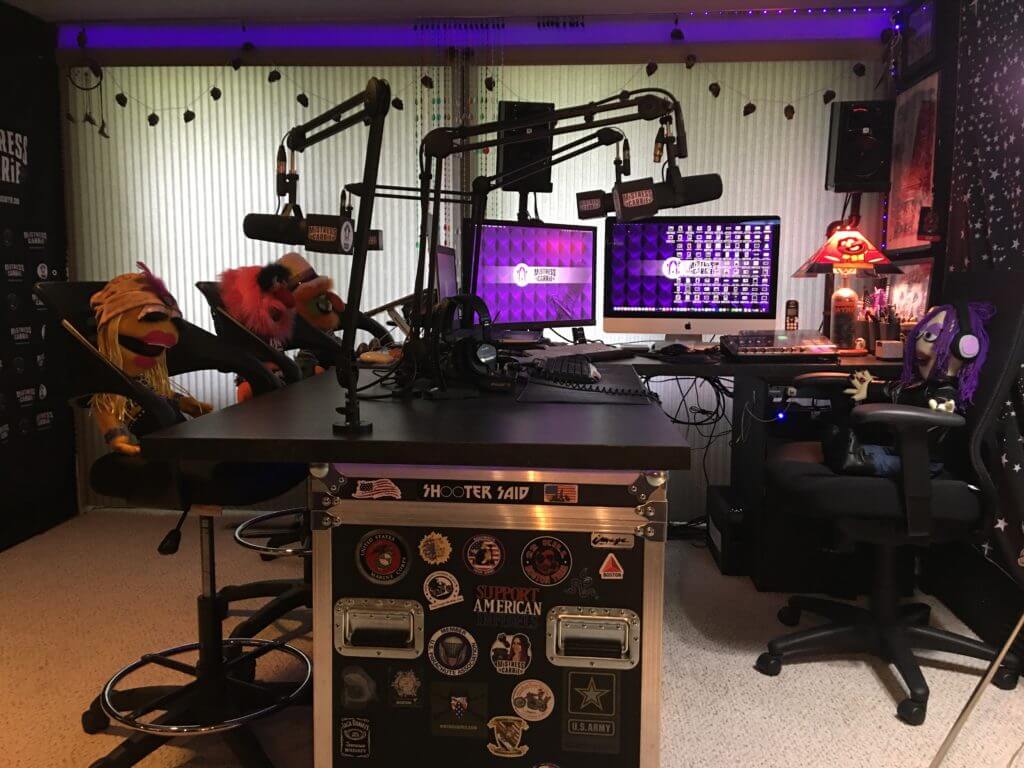 I wanted the place to feel cozy, comfortable, and to be a place that I wanted to spend my time. Otherwise, I wouldn’t be happy being locked away in there for hours at a time. There are even purple LED lights to give it that Mistress Carrie vibe! Finally, after begging my electrician to run high speed internet to my new studio, dubbed MCHQ, was ready to Rock! 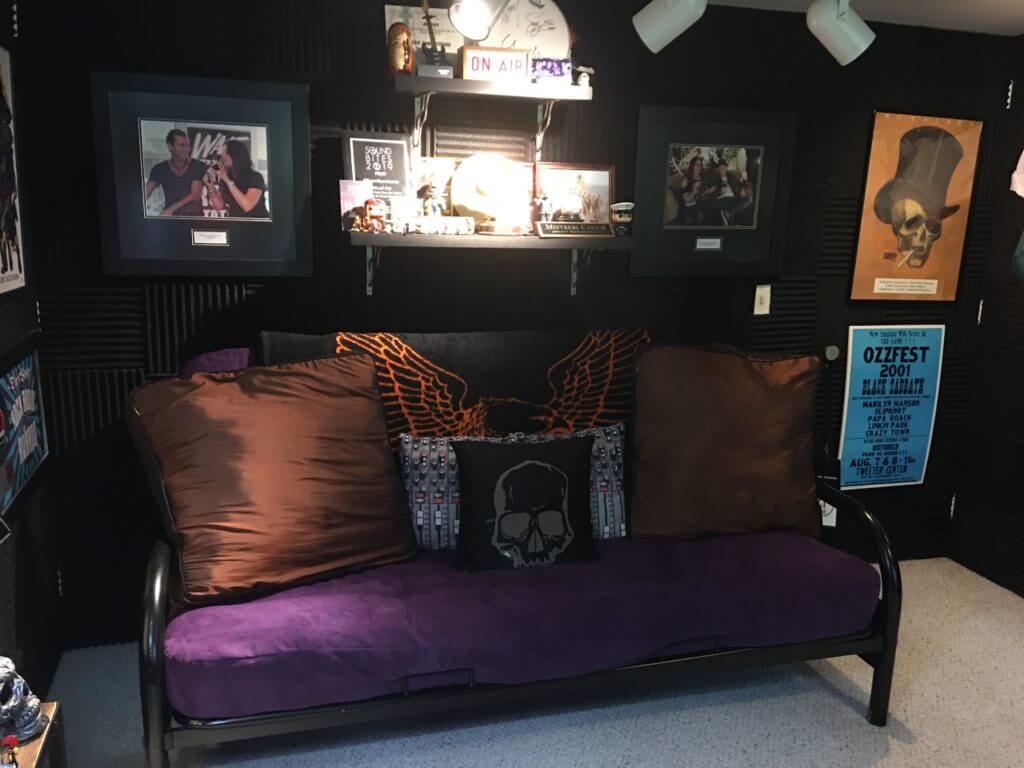 And in June of 2020, The Mistress Carrie Podcast was born! By May of 2021, I was back on the air at Westwood One, and Cumulus, where I still am today. I’m on the air here in Massachusetts on dozens of stations around the country, and even on AFN (American Forces Network) rocking out with our troops on bases and ships around the world.

The podcast is now listened to in all 50 states, and in 130 countries. The Mistress Carrie brand is alive, and thriving. I even have a website and merch store, too! All because I took a blind leap of faith, and a huge financial risk, and said “If you build it, they will come!”