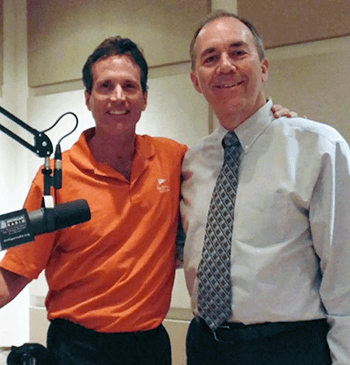 Schram, a MSU alumnus was interviewed this past week by Russ White of MSU Today.

Schram reflects on his rewarding career and describes how he fell in love with radio as a 10-year-old boy thanks to listening to Top 40 radio while visiting a cousin in New Jersey in 1963. And Steve tells of a wonderful circle of life moment about when he got the chance to tour his favorite radio station – WKNR Keener 13 – as a young boy. On the tour, Steve met the WKNR station manager, who asked Steve what he thought he might want to do in the radio business. Steve replied that: “Someday I’d like to sit in your chair.

“And here’s the magic behind that. Twenty-seven years later, I became the general manager of WNIC, the successor station to WKNR. In that same building, that same office became my office, and it was the exact same desk that I sat behind.”

Schram talks about challenges and opportunities facing the constantly evolving radio industry. He describes the generational differences in how people consume media. And he talks about why he chose to attend college at MSU and how that experience impacted him. And he shares his advice for today’s Spartans studying communications.