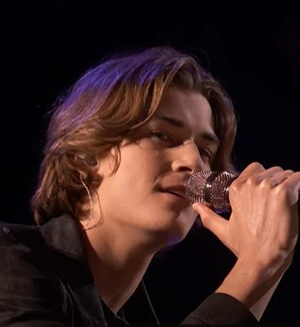 McKibbin Media Group's WKHM-FM (K105.3) (Jackson) is partnering with the Michigan Theatre of Jackson to host a free viewing party for Brayden Lape's final performance on NBC's 'The Voice' this Monday night (12/12).  Lape is a 16-year old singer from Grass Lake, just outside of Jackson.

The viewing party will take place at the Michigan Theatre of Jackson, 124 N. Mechanic St. Doors open at 7:00 p.m., K105.3 will play Brayden Lape trivia with the audience and give away prizes beginning at 7:30 p.m., and the episode will begin airing at 8:00 p.m.  Admission is free, but donations to the theatre are welcome. The station will also be accepting donations of non-perishable food items for the Jackson Community Food Pantry as well as new, unwrapped toys for Toys for Tots.

“Brayden Lape’s rise in the show to The Voice finals has been so exciting,” MMG president and owner Katina McKibbin said. “McKibbin Media Group has been following Brayden all along, like the rest of the community, so we’re excited to host this special watch party for him in his final performance. A big thanks to the Michigan Theatre for partnering with us on this endeavor.”

This is the second-to-last episode of the season where five finalists will perform live, each in hopes of swaying the public vote in their favor one last time. One of these five finalists is Grass Lake High School sophomore Lape, who quickly rose to fame over the last several months as a popular contestant of 'The Voice' under celebrity coach Blake Shelton. Lape is the youngest of the five finalists at 16 years old.