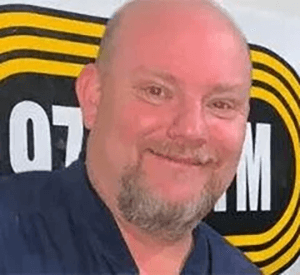 Cumulus Media's WLAV-FM Grand Rapids has announced that former Detroit radio personality Gregg Henson is joining the station as morning co-host. He joins Michelle McKormick and Travis Gibbs weekdays from 5:30 -10 a.m. on the newly-named "Michelle and Gregg With Travis Show."

Hailing from Troy, MI, Henson started his career at Classic Rock WCSX-FM in Detroit, and six years later, he headed to crosstown Sports/Talk WDFN-AM as Director of Programming and morning host. In the early 2000's, Henson moved to Talk WKRK-FM in Detroit and created a hybrid FM 'Hot Talk' show "Motor City Middays" with McKormick. His radio career then took him to stations in Austin, Philadelphia, Dallas and Pittsburgh. Henson returns to Michigan from Richmond, VA after a successful run at heritage News/Talk WRVA.

Cumulus West Michigan Operations Manager Lori Bennett said, "With the 50th anniversary of WLAV next year, it's thrilling to have an innovator like Gregg join us in bringing the station to the next generation of Classic Rock fans. We know the killer chemistry he's enjoyed best with Michelle McKormick, and paired with the comedic timing of Travis Gibbs, Mornings on WLAV will be transcendent and almost criminally funny."

Vice President/Market Manager Derek J. Falter commented, "Behind Gregg's hardcore Rock roots and razor-sharp wit is a dedicated community leader and passionate advocate of the audio industry. We look forward to Gregg's contributions to the next incredible chapter in the history of one of the country's greatest Classic Rock stations."

Henson remarked, "Returning home to Michigan to work with Michelle McKormick and Cumulus is very exciting for me and my family. We're beyond happy with our next adventure."