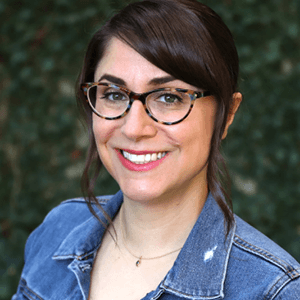 After conducting an extensive search, Michigan Radio is pleased to announce that Rebecca Kruth has been named as the station's new All Things Considered host. Rebecca replaces Christina Shockley, who left Michigan Radio in June to help coach public radio hosts and reporters across the country.

Rebecca will be a familiar voice to many Michigan Radio listeners since she has been the station’s weekend morning host since 2016. In that role, she also co-hosts and produces the popular That’s What They Say segment exploring our changing language, along with University of Michigan English Professor Anne Curzan. She has also served as a backup host for both All Things Considered and Morning Edition.

“As Weekend Edition host, I feel that I’ve forged a connection with our listeners, who have come to rely on me as part of their weekend routine,” said Kruth. “Now I’m looking forward to building on that as the voice they rely on for news and information at the end of the work day.”

Rebecca started working at Michigan Radio in 2014 as a Morning Edition intern. Following that, she served as a general assignment reporter and fill-in host before becoming the station’s full-time Weekend Edition host. She also has previous public radio experience at WBEZ in Chicago, WKAR in East Lansing and Aspen Public Radio.

“We’re excited to have Rebecca as our new afternoon host,” said Michigan Radio Program Director Matt Shafer Powell. “She has an on-air sound that exudes warmth; and a deep commitment to the role that public radio journalism plays in society.”