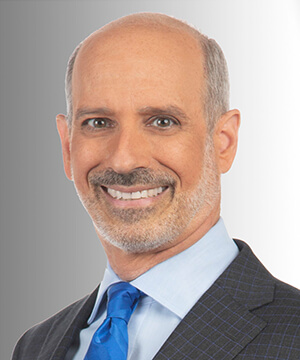 WDIV-TV (Detroit) has announced that longtime meteorologist Paul Gross has made the decision to retire, after 40 years in the business.

“When Paul informed us he was retiring I tried to talk him out of it,” said WDIV Vice President and General Manager Bob Ellis. “We hoped he’d stay forever. But it became clear quickly 40 years was a nice round number, and the time was right to relax more, spend more time up north and play more golf.”

“I join every viewer of Local 4 News and reader of ClickOnDetroit in thanking him for his contributions to keeping people informed and safe in SE Michigan.”

Gross started at the station in January of 1983, when he was a college kid at the University of Michigan. He landed his first paying job at his dream TV station, WDIV, the one he grew up watching.

His work is a part of the Museums of Television and Radio History in New York and Chicago, the British Meteorological Archives, and the official D-Day collection of the Dwight D. Eisenhower Presidential Library in Kansas. Gross spent three-and-a-half years researching the weather and its impact on D-Day in 1944 and wrote and produced a documentary for the 50th anniversary which can be found at these locations and currently on Local 4+.

His other greatest accomplishment was in 1998, when legislation was introduced in the Michigan House requiring all public schools to conduct two tornado safety drills per school year (one in the spring, one in the fall). Gross testified before the State House and Senate Education Committees and was with Governor John Engler when he signed the “Gross Weather Bill” into law. Every public school in Michigan is now legally required to conduct these tornado drills thanks to his passion for keeping our community safe.

Gross has been recognized by the American Meteorological Society as one of the nation’s leaders in communicating the truth about climate change without the politics, starting way back in 1990. He was also awarded the Scientific Prize for best television weather presentation among the forty-three nations represented at an international broadcast meteorology conference in Paris, France in 1996.

WDIV also announced that to honor his work at the station and in the community, Gross will become the first ever Meteorologist Emeritus in station history, meaning in retirement he will forever remain a part of the staff at WDIV.

“This is the first time at WDIV anyone has been given this title,” said Ellis. “It means he’ll be a part of our team forever, and it also recognizes his contributions over the years to warn viewers of potential severe weather and making sure they were always prepared to stay safe.”

An on-air sendoff for Gross is expected to be announced at a later date.