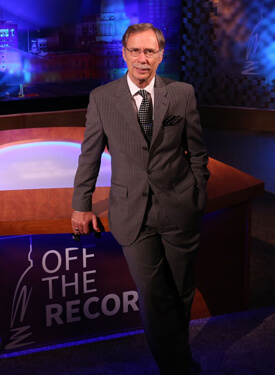 The award-winning Michigan-based public affairs television series Off the Record marks 50 years on the air this week. The first episode of the weekly show examining Michigan politics and government aired on February 4, 1972. Seen statewide in Michigan and in Northern Indiana, the series is produced at WKAR Public Media and is a presentation of Michigan Association of Public Broadcasters.

“As Off the Record reaches this milestone, we’re proud to celebrate 50 years providing timely news and information to Michiganders,” said Susi Elkins, WKAR general manager and director of broadcasting. “Congratulations and thank you to Tim Skubick and the hundreds, if not thousands, of journalists and political figures who have appeared on the show to keep the public informed and up to date on the political issues that affect our lives.”

True to its signature tagline, “getting the inside, out,” the typical Off the Record episode features a panel of journalists who cover the state capitol, anchored by senior capitol correspondent Tim Skubick. Skubick and the panel discuss the issues of the week for the first portion of the show, and then move on to interview a guest newsmaker, pundit or candidate.

Skubick has been the producer and anchor for Off the Record since bringing the show to WKAR in 1972. At that time, the show was produced in a tiny studio in a World War II-era Quonset hut, where the Breslin Center stands today.

“To be honest, nobody really thought it would last. But here we are, some 50 years later, still trying to provide our faithful viewers with political news and insights they can’t get anywhere else,” said Skubick. “It goes without saying that OTR is nothing without the tremendous talents of our capitol press corps colleagues and, equally as important, the host of political figures who have endured all those cross-fire questions in the name of keeping the citizens informed. And a huge thank you to the Michigan Public TV viewers who gave the program the legs to last this long and beyond. 50 is just a mile marker, as this correspondent and colleagues look toward to number 75.”

The guest on the February 4, 1972, program was Michigan Lt. Gov. James Brickley. In the years since, guests have included Governors Milliken, Blanchard, Engler, Granholm, Snyder, and Whitmer, either while in that office or as candidates. Skubick and his press corps colleagues have interviewed political figures representing every corner of Michigan and national figures including presidential candidates.

“Congratulations to Tim Skubick, the capitol press corps, WKAR, MSU and all the Michigan public television stations that have aired Off the Record statewide for the last 50 years,” said Governor Gretchen Whitmer in a recorded video message. “An informed electorate is necessary for a strong democracy, and you’ve kept Michiganders informed and up to date on what’s happening in our state’s Capitol Building and we are all the better for it.”

With studios on the campus of Michigan State University, WKAR’s proximity to state offices in Lansing gives ready access to key figures in Michigan government and the journalists who cover them. Episodes are recorded early Friday mornings while the political news of the week is fresh, and then distributed to public broadcasting stations statewide and beyond for airing throughout the weekend.

It is estimated that Michigan’s longest running statewide public affairs program has aired more than 2,450 episodes, at 52 episodes per year plus specials.