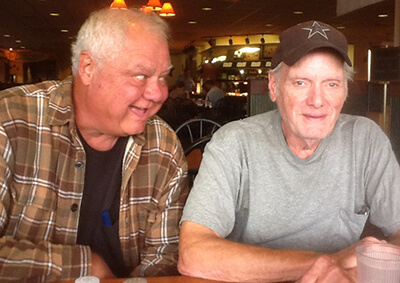 Longtime Michigan radio broadcaster David Carmine, known to many as "Dave Carr" (or "Cactus Dave Carr") passed away August 8 at his home in Harrison at age 80.  Carmine was a legend in the state, serving as an on-air personality, program director, engineer and station owner.

Carmine's broadcast career goes back to the early 60s, where he worked at Detroit-area stations WYSL-AM (now WSDS) and WEXL-AM (now WCHB).  He helped build and was a charter air staff member of WYSL.

In 1975, Carmine moved his family from Detroit to build and operate WKKM-FM on 92.1 Mhz.  Carmine signed on the air with a country format, billing it as "The Country King" and "The Mighty 92" and kept it under this format until he sold the station in 2002, choosing to retire. That station, known today as WTWS, was later re-licensed to Houghton Lake, Michigan, and its new sister station, WUPS, was re-licensed to Harrison.

In 2002, Carmine formed "The Country King, Incorporated" as a non-profit entity, with the intent of starting a non-commercial educational station in Harrison.  The Country King originally operated non-commercially (as WKKM) on 90.7 Mhz from 2008 to 2011, when it was sold to Strong Tower Radio.  It now operates under the call letters WBHL.

In 2013, Carmine launched a low-power FM station on 106.5 Mhz, also with the WKKM call letters and has been operated the station right up until his passing this past week.

A devotee of country music, he was personal friends with Sonny James, Statler Brothers and other old-school country music performers. He made numerous trips to Nashville.

Carmine was a Plymouth native and is survived by his brother, Daniel Carmine.  Arrangements are incomplete at this time.