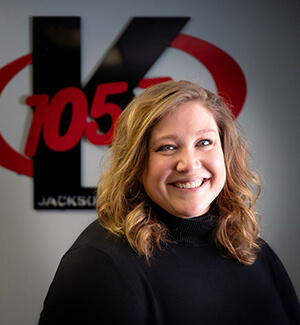 McKibbin Media Group (MMG) has announced that Jenny Lewis has moved to the helm of the group’s flagship station morning show on WKHM-FM (Jackson) as of Monday, November 6.

Lewis started with McKibbin Media Group as co-host of the K105.3 Morning Show, alongside Scott Clow, in 2017. She is a graduate of Northwest High School and attended Liberty University.

While remaining the morning show co-host, Lewis was promoted to Production Director in 2020. In this role, she oversees production of the Jackson stations’ on-air advertising for hundreds of clients.

In her latest advancement, Lewis has taken over the mixing board as the main host of the K105.3 Morning Show and will be joined by a new co-host to be announced at a later date.

"I am so excited and humbled to continue to have the opportunity to be a part of waking up Jackson as the new host for the K105.3 Morning Show,” says Lewis. “I look forward to having coffee with you every morning on the way to drop the kids off at school and on the way to work. I'd love the morning show to feel as if you're going on a road trip with your best friend. You've got coffee, snacks and great music! Buckle up; it'll be a fun morning."

“We’re pleased to give Jenny this opportunity to host the K105.3 Morning Show,” MMG General Manager Dennis Worden said. “Jenny is a bright shining star in our community and will do a great job providing a quality and entertaining show for our listeners. McKibbin Media Group would also like to thank longtime host Scott Clow for his contributions to our stations. We wish him the best in his future endeavors.”
The Morning Show takes place live from 6 - 9 a.m. Monday through Friday.